All Fiction Battles Wiki
Register
Don't have an account?
Sign In
Advertisement
in: RWBY, Characters, Female Characters,
and 29 more 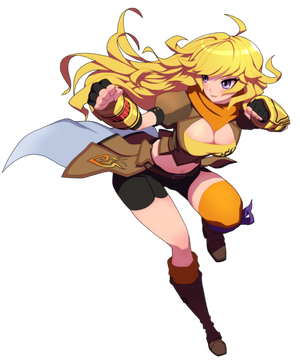 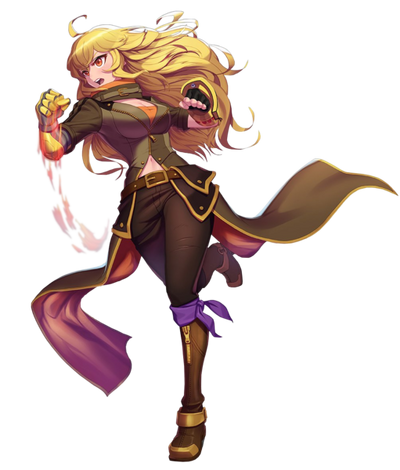 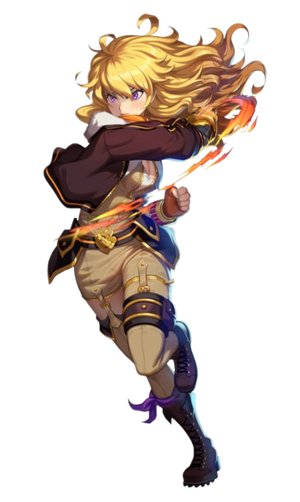 Yang Xiao Long is one of the main characters of RWBY and she's the sister of Ruby Rose.

Superhuman Physical Characteristics, Regeneration (Mid-Low; aura can heal the user when they receive large wounds, leaving no scars), Martial Arts (Type 3. She has trained with many skilled fighters and has beaten many well trained ones, and uses it as her main form of fighting), Weapon Mastery (Type 1. She's skilled with her Ember Celica), Aura (RWBY), Aura and limited Soul Manipulation (She manifests her soul in the form of life force to create a shield around her and it's direct connected to her life), Forcefield Creation (She has a shield around herself at all times), Statistics Amplification (She can increase her striking power with her aura), Enhanced Senses (Aura can enhance the users senses), Acrobatics (She's able to do many mid air maneuvers), Vehicular Mastery (She's very skilled at driving motorcycles and vehicles the same style), Rage Power (Types 1 and 2), Reactive Power Level (Via Burn, which will increase her power as she takes damage), Energy Projection (Her shotgun blasts are surrounded by energy), Transformation (Her eyes change color and her hair has fire on it when she uses Burn), Fire Manipulation (Her bullets have fire around them and her hair is set on fire while using Burn), Pseudo-Flight (Can propel herself using Ember Celica), Shockwave Generation (By punching the ground or using Burn it creates a shockwave), Resistance to Heat Manipulation and limited Ice Manipulation (Aura protects the user from sub-zero temperatures, allowing them to walk through a blizzard in casual clothing or be encased in ice without being cold, as well as extreme heat up to and including the heat of flames, being blasted with steam, and being submerged in lava without being burned), limited Soul Manipulation (Aura can protect from aura enhanced physical attacks).

All previous abilities, Explosion Manipulation (The upgrade to Ember Celica allows her to use sticky grenades)

Stamina: High (Yang can mutilate hordes of monsters with no signs of fatigue)

Intelligence: Gifted (Yang is a highly skilled fighter, being able to outmatch groups of enemies and grimm much larger than herself in hand to hand combat. After losing her arm in an encounter with Adam Taurus and gaining a atlesian prosthetic arm, she spent several months receiving one on one combat training from her father Taiyang Xiao Long, a professional huntsman who's trained with Qrow Branwen, Raven Branwen and Summer Rose)

Semblance: Burn: Yang's Semblance is the ability to absorb kinetic energy from the damage she's taken and redirects it twice as hard at her opponent, effectively making her faster and stronger with each hit.