All Fiction Battles Wiki
Register
Don't have an account?
Sign In
Advertisement
in: Characters, Genderless Characters, Gems,
and 38 more 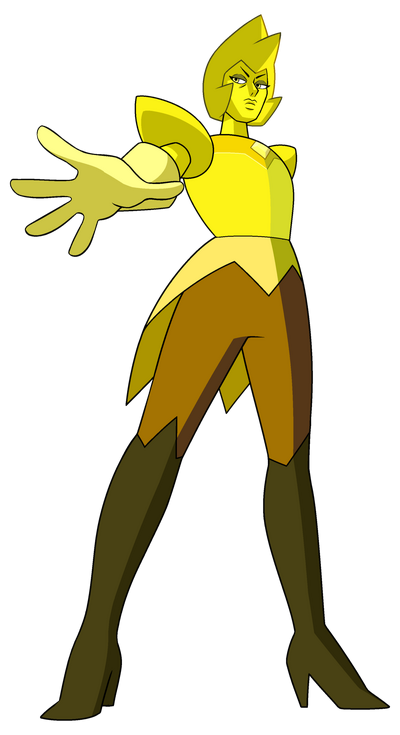 Yellow Diamond is a Homeworld Gem and a member of the Great Diamond Authority that rules over the Gem race. She was first shown in the extended theme song and made her debut appearance in "Message Received". She is said to be flawless, with no weaknesses, as well as being a Diamond, which are the strongest varieties of gems on Homeworld. As a result of Era 3, Yellow now works to repair Gems she had previously shattered in her Cluster experiments and wishes to use her powers to help other Gems alter their physical form if they choose to do so.

Superhuman Physical Characteristics, Immortality (Types 1, 2, 3 and 8; Gems do not age, will continuously regenerate unless their gem is broken and their immorality is reliant on their gem), Regeneration (High-Mid; Their bodies are created by their gem and will regenerate fully inside their gem), Inorganic Physiology (Type 2. Gem's physical body is made of light energy and their gems are made of similar gemstones), Transformation, Large Size (Type 1), Self-Sustenance (All Types. Gems don't require oxygen, don't need food and although they can sleep they don't require it to survive), Shapeshifting (Gems are able to completely change their physical form into animals, objects and etc), Size Manipulation (Gems are able to change their physical form but they can't maintain it forever and she can permanently alter other beings sizes), Body Control (Gems are able to stretch their limbs long distances and etc), Biological Manipulation (Gems are able to produce a womb and a digestive system), Fusionism (Gems are able to fuse which each other making a stronger being of the combination), Adaptation (Gems physical bodies will automatically adapt to the new environment's gravity), Pocket Reality Manipulation and Dimensional Storage (Gems all have a pocket dimension of infinite size within their gem and they can store their weapons/items in it), Sealing, Power Nullification, BFR and Teleportation (Gems can encase objects or beings inside of bubbles which will depower the one inside and they can teleport the bubbles to specific locations), Aura, Extrasensory Perception, Non-Physical Interaction and Damage Boost (Yellow Diamond's aura was shown to be able to detect and interact with Steven while he's in the astral plane as well as increase their attack power), Corruption (Types 1 and 2. The Diamond Blast was able to corrupt multiple gems on Earth), Purification (Types 1 and 2. She can purify the corruption on gems that she has done), Light Manipulation and Energy Projection (Gem's bodies are made of light energy), Electricity Manipulation, Deconstruction (She can deconstruct a gem's physical body forcing them into their gem), Healing (She can restore shattered gem bringing them back to life even if they lack pieces), Transmutation (She can permanently alter gem's physical forms and hybrids which contain inorganic material)

Attack Potency: Large Star level (The Diamonds are considered to be by far the most powerful Gems in existence, she could overpower Blue Diamond, the Diamond Blast which corrupted and destroyed all the gems on earth was done by White Diamond, Blue Diamond and her)

Lifting Strength: At least Class Z, likely higher (She could lift a portion of Blue Diamond’s ship and is superior to Steven Universe who while weakened could lift Spinel's Gem Injector, Lapis Lazuli who could lift all of the Earth's ocean)

Stamina: Infinite (As long as their gem is intact they could fight forever as stated by Garnet)

Intelligence: High (As the commander of the Gem Homeworld military, Yellow Diamond has extensive knowledge of combat and tactical warfare which has allowed her to conquer thousands of planets)

Weaknesses: If enough damage is done to her physical body she'll gone into her gem to regenerate which will leave her vulnerable