All Fiction Battles Wiki
Register
Don't have an account?
Sign In
Advertisement
in: Characters, Male Characters, Flight Users,
and 78 more

Yhwach, often referred to simply as "Your Majesty" (陛下, heika) by his underlings, is the Father of the Quincy and the monarch of the Wandenreich, with the designation "A" - "The Almighty". He is the son of the Soul King.

Yhwach was the leader and progenitor of the Quincy; a race of Humans with spiritual abilities. Born over a thousand years ago, much of his early history is a mystery, Yhwach had created a large empire with which he aimed to destroy Soul Society.

In unknown circumstances he lost the war against the Shinigami and was sealed away for hundreds of years, eventually emerging with a new army and empire.

Superhuman Physical Characteristics, Flight, Enhanced Senses, Extrasensory Perception, Intangibility, Existence Erasure (Quincy can erase the souls using their arrows), Invisibility, Martial Arts, Weapon Mastery, Longevity, Immortality (Type 3), Regeneration (Low-Mid), Non-Physical Interaction (Can interact with intangible and non-corporeal beings), Light Manipulation (Shown here), Energy Projection (Can shoot arrow projectiles with his Quincy Bow. Can launch multiple beams of Reishi), Weapon Creation (Created a sword to bifurcate Yamamoto), Explosion Manipulation (Can vaporize targets with explosions caused by Heilig Pfeil), Forcefield Creation (Can create a shield from his Blut Vene), Corrosion Inducement (Can corrote targets affected by his Blut Vene), Power Absorption (Can steal the power of others with Sank Altar. Stole Yamammoto's powers), Power Bestowal (Can grant powers to others by sharing a portion of his soul to them), Healing (Able to heal people by bestowing portions of his soul), Statistics Amplification (Can increase his defense and offense with Blut techniques), Dimensional Travel, Darkness Manipulation (Can control his shadow as if it was a portal), Probability Manipulation and Durability Negation (With The Balance), Self-Sustenance (Types 1 and 2), Aura and Soul Manipulation (Spiritual pressure can passively induce ailments ranging from paralysis to death), Resistance to Paralysis Inducement, Soul Manipulation, Power Absorption, Power Nullification and Statistics Reduction(Gave his powers back to himself after being taken away from him)

Causality Manipulation (With the Anti-Thesis, can completely reverse something that already happened back to the opponent), Body Puppetry, Power Mimicry and Biological Manipulation (The Compulsory can invade people's bodies and control their nerves, as well as copying their abilities), Healing, Poison Manipulation, Death Manipulation and Reactive Evolution (With the Death Dealing, can grant himself complete control over all "Lethal Doses" within his range. He alters the dosage of any substance he ingests or tanks, manipulating the 'poison' and either granting himself complete immunity within a single minute or lowering an opponent's resistance to kill or incapacitate them), Transmutation and Explosion Manipulation (With The Explode, can turn anything it touches into a bomb), Fear Manipulation (With The Fear, can search through the memories of the subject to find any trace of fear they may have ever had in their life to act upon it, so even if they currently have no fear, if their past does they will be affected. From there, everything the target does from then on will be hindered by their own thoughts and fear of actions), Body Control and Consumption (With The Glutton, extend his jaw to be able to bite and consume targets), Fire Manipulation and Heat Manipulation (The Heat, can create and manipulate fire), Statistics Amplification (With The Iron, can increase durability stats), Sealing (Can create a prison where the target cant escape from), Empathic Manipulation (Can make people fall in love and obey his commands with The Love), Regeneration (Low-Godly), Immortality (Types 3 and 8), Reactive Power Level (Can regenerate and turn any and all damage into power with The Miracle. With The Overkill, becomes stronger the more he kills), Electricity Manipulation (With The Thunderbolt, can generate, manipulate and project lightning), Reality Warping, Death Manipulation, Transmutation, Earth Manipulation, Duplication, Creation, BFR and Portal Creation (With The Visionary, anything he imagines can become reality. Can turn people's bones into cookies. Can summon earth constructs. Can harden his body. Can create shields. Can manipulate earth blocks. Can duplicate himself), Spatial Manipulation (Can bend away space to avoid attacks), Durability Negation (Can puncture holes in anything between without durability taken into account), Shapeshifting (With The Yourself)

All previous powers, plus Precognition (Type 2. The power of the Almighty is to see all that lies in the future, observing all possible futures like grains of sand in the wind, the knowledge that Yhwach uses to predict his opponent's actions and act accordingly), Reactive Evolution and Power Nullification (Every power that he sees in the future becomes incapable of harming him. Can change the future to where attacks fail to hit him or breaks instead), Fate Manipulation (Can transform and change the future at will. Can attack his targets through the future), Resurrection (Passively rewrites the future to no longer be dead), Teleportation, Regeneration Negation (Yhwach can rewrite the future in a way that healing and regeneration become futile), Telekinesis (Obliterated Ichibe's torso. Pushed Ichigo away), Absorption, Resistance to Conceptual Manipulation (Resisted Ichibe's conceptual power nullification), Causality Manipulation (Orihime's powers had no effect on the damage caused by Yhwach)

All previous powers, plus Acausality (Type 2) and Non-Corporeal

All previous powers, plus Immortality (Types 1 and 5), Cosmic Awareness, Transmutation (Reshaped the royal palace to his own eye), Summoning, Self-Sustenance (Type 3)

Intelligence: Gifted (Yhwach is an innate strategist, having secretly gathered and lead the Wandenreich to victories in Hueco Mundo without alerting the Soul Society, and maneuvering his soldiers expertly to outperform and defeat the Shinigami again and again)

Weaknesses: He is quite arrogant. Blut Vene and Blut Arterie use two different reishi systems, so they cannot be used at the same time.

Soul Distribution: As the son of the Soul King, Yhwach was born with the special ability to distribute portions of his soul to others on contact. Yhwach cultivates his already great power by bestowing these bits of his soul to others, allowing them to refine it, and then taking it back. Each piece of his soul that Yhwach regains will make him stronger and extend his lifespan, and he can deliberately absorb these pieces of the soul to maintain his strength, which he must do during his sleep to prevent himself from returning to the immobile state he was born in.

Those who have gifted a portion of Yhwach's soul have their lifespans greatly reduced, but all their ailments, whether physical, spiritual, or mental, are healed and all their knowledge and skills are engraved onto their share of his soul. Once their lowered lifespans run out, the piece of Yhwach's soul returns to his possession, ultimately restoring his motor skills and senses after he lost them.

Yhwach ultimately refined the process of sharing his spirit with others, allowing him to bestow upon them great powers through a Schrift, engraving a letter corresponding to a certain one of his powers into their soul and then having them drink his blood. The Quincies that gained powers in this way are Yhwach's Sternritter, and upon their deaths, their power will return to Yhwach's hands once more.

Auswählen: The extension of Yhwach's abilities to distribute portions of his soul, which he utilized after being sealed for 990 years to regain the power that he had lost. After selecting whichever Quincies he deems appropriate for absorption, typically choosing the "impure", Yhwach can absorb their power and retake his soul, killing his victims in the process. This power can thus be redistributed to whichever Quincies Yhwach deems more useful, reviving those that have died.

Absorption: Yhwach can consume other beings on contact, gaining their powers and abilities and drawing their existence into his body to subjugate them. He can near-instantly absorb those weaker than him, but those that are stronger take longer and longer amounts of time.

Sankt Altar: Yhwach summons five orbs of Reishi, which he transports to around his opponent, at which point they all fire a beam of energy at their target, forming the shape of a Quincy Zeichen. Those who are caught in the blast have all their power stripped away by Yhwach.

Self-Power Restoration: Even if Yhwach's physical or spiritual capabilities are hampered or somehow negated by his opponent, he can restore them. For example, when Ichibē's curse prevented him from speaking, Yhwach was able to regain the power of speech by digging his fingers into his throat and channeling Reishi inside, and after his power was cut in half by Ichibē's Zanpakutō, he was able to restore it by summoning and absorbing ribbons of Reishi inscribed with Roman letters.

The Almighty: The power of the Almighty is to see all that lies in the future, observing all possible futures like grains of sand in the wind, the knowledge that Yhwach uses to predict his opponent's actions and act accordingly. However, this is only a portion of its true power, which is the ability to outright choose between the futures that lie before him, rewriting fate as he pleases to best suit his goals. Yhwach can use this power to set up traps in his opponent's future paths, easily circumvent any defensive measures his opponent takes, and shatter their weapons and forms, breaking Tensa Zangetsu and claiming to have destroyed all the Bankai in the future. He can even rewrite a future in which he has died, and it is said that any power that Yhwach sees in the future will become his ally and grow incapable of harming him at all.

Reishi Manipulation: As a Quincy, Yhwach can manipulate and shape Reishi by absorbing it from the atmosphere and combining it with his stock of spiritual energy. It is easier to collect this energy in locations with higher concentrations of Reishi, such as the Soul Society and Hueco Mundo. Yhwach's control over Reishi is exceptional, allowing him to easily shape and solidify it as he pleases, creating an intricate throne and later a staircase.

Shadow: A teleportation ability used by members of the Wandenreich, this technique can be used by manifesting the user's shadows in front of them, creating a portal that acts as a gate between the Schatten Bereich and other dimensions. The size of these portals can be extended to allow many others to pass through. 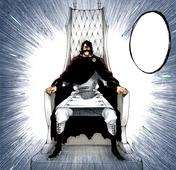 Yhwach on his throne 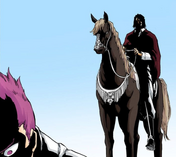 Yhwach arriving on his horse