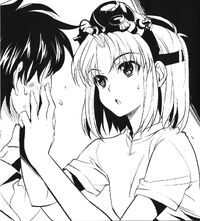 Yoshie Kita, also known by the pseudonym Yoshihiko, is a main character of Ichiban Ushiro no Daimaou. She is a video game aficionado who has spent years researching the virtual alternate dimension, and was contracted by 2V to create a device that could control said world.

Durability Negation (Evil Slayer deals more damage to evil beings), Healing and Regeneration (Mid) Negation (Negated the effects of Akuto's regeneration and Keena's healing was ineffective on the wounds dealt by it)

Stamina: As a passionate gamer, Yoshie can spend more than 24 hours awake without the need for sleep.

Intelligence: Supergenius. She's an expert researcher of a 4th dimensional space who can create devices fully capable of controlling it and sending other people into it.