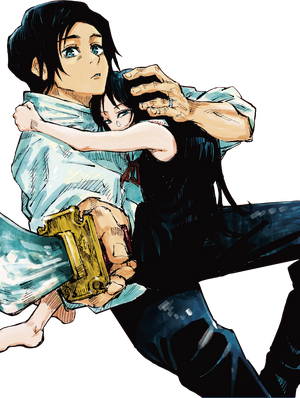 Powers and Abilities: Superhuman Physical Characteristics (Yuta is one of four special grade sorcerers recognized by Jujutsu High, dominated all of the Kyoto students in the 2017 Goodwill Event), Weapon Mastery (Yuta reinforces his body and blade with cursed energy, allowing him to wield it with superhuman physical prowess.), Energy Manipulation, Non-Physical Interaction (Can interact with Curses who are abstract manifestations born out of people's thoughts, mind, and negative emotions.) Enhanced Senses (Can see Curses - that are invisible to the human eye), Curse Manipulation (Has an endless mass of curse energy - that can be shaped at will), Corruption (After rejecting Rika's death, he was able to corrupt her soul turning her to a vengeful cursed spirit), Healing (Was quickly able to adapt to his friends' injuries and use a Reverse Cursed Technique to heal all of them at once.), Statistics Amplification (Can amplify his physical power by flowing Cursed Energy through his bodies), Aura & Fear Manipulation (His mere presence is full of curse energy and dreadful, to which it's creepier compare to Gojo's presence), Power Mimicry (Can unconditionally copy Cursed Techniques), Death Manipulation (By copying Inumaki's Cursed speech - He was able to command every single one of Geto's swarm of lower-grade curses to die at once.)

Attack Potency: City level+ (Can channel Rika's power through his own cursed energy. Rika is powerful enough to destroy a whole town.) | Mountain level (Upon confronting Yuji, Naoya Zenin, and Choso, both exceptional jujutsu users recognized that Yuta was far more powerful. Choso advised Yuji to run at all costs because fighting Yuta would ensure death, comparing his strength to Satoru Gojo's. Was able to "kill" Yuji)