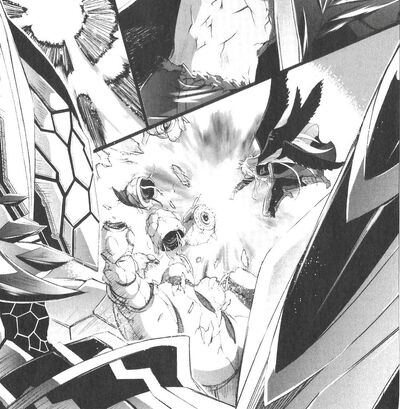 Zero is an antagonist of Ichiban Ushiro no Daimaou. Zero was the first L'Isle Adam who serves as their supporting pillar and was created to protect the world, which led him to decide the best way to do it was to destroy mankind, becoming the first of the series of Demon Kings. Afterwards, with the creation of The Computer Gods who were based on him to take his place, the first Demon King war happened, which led to Zero's defeat, whose power was sealed inside the Holy Grail and sent to the virtual alternate dimension turned into the sword Evil Slayer. However, he was awakened 100 years later by 2V, which allowed him to seal the gods and take over the world as the new god.

Limited Flight (Can only flight short distances), Durability Negation (Evil Slayer deals more damage to evil beings), Healing and Regeneration (Mid) Negation (Negated the effects of Akuto's regeneration and Keena's healing was ineffective on the wounds dealt by him), Resistance to Law Manipulation (Exists beyond the rules of the virtual alternate dimension)

All previous, Superhuman Physical Characteristics, Technological Manipulation (Can control AI and cause them to malfunction), Magic, Hacking (Hacked The Computer Gods' system), Sealing (Sealed The Computer Gods), Power Nullification (Cut the connection between people and The Computer Gods' system, nulling any attempt at using magic), Large Size (Type 1, His diameter is 20 meters long), Spatial Manipulation (A dimensional slash can ignore distance and cut with a precision higher than a monomolecular cutter, which cut at a molecular level, and bypass all kinds of barriers by cutting the dimension itself), Shapeshifting (Can alter his physical appearance to adapt better to battles), True Flight, Immortality (Types 6 and 8; Can transfer his mind to a L'Isle Adam if his body is destroyed, and his sense of self –that is, his true body– is a black box located where he was born –the moon–, and he cannot be truly killed unless said black box is sealed)

All previous, Telepathy, Absorption (Absorbed the mana in the atmosphere), Air Manipulation (Can create cyclones, whirlwinds and typhoons, as well as removing the air from his surroundings), Analytical Prediction (Able to predict Akuto's actions by analyzing his fighting style), Martial Arts

All previous except Immortality and Large Size, Biological Manipulation (Can block the calculations taking place within the human body by touching it), Mind Manipulation (He can take over the mind of every human being on earth, rendering them unable to take any kind of action)

Stamina: As a L'Isle Adam, Zero can fight indefinitely.

Intelligence: Zero served as the basis of the Computer Gods who contain the knowledge of every single action, every single thought, every single emotion any human being had ever have, knowing the entire life of every single individual in the past, and in addition to this, Zero also has access to all the information provided by the L'Isle Adams across the world.

Standard Equipment: None | A vast army of L'Isle Adams and the Holy Grail | None | The Lunar City

Weaknesses: Evil Slayer has very limited movement. His sense of self can be sealed by entering into contact with it. If Zero were to be killed, all L'Isle Adams and the gods will stop functioning.

Notes: Despite his sealed form fused with the Holy Grail is said to contain a virtual alternate dimension on Act 8, this one doesn't have the same 4th dimensional statements as the one shown on Act 7, so this form should not be scaled to Low 2-C via these statements.