All Fiction Battles Wiki
Register
Don't have an account?
Sign In
Advertisement
in: Characters, Genshin Impact, Male Characters,
and 43 more 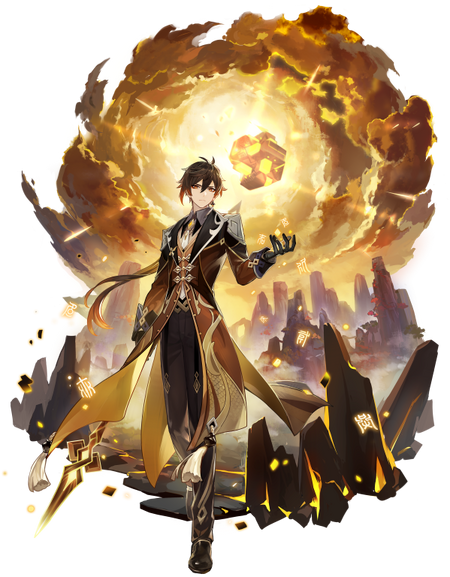 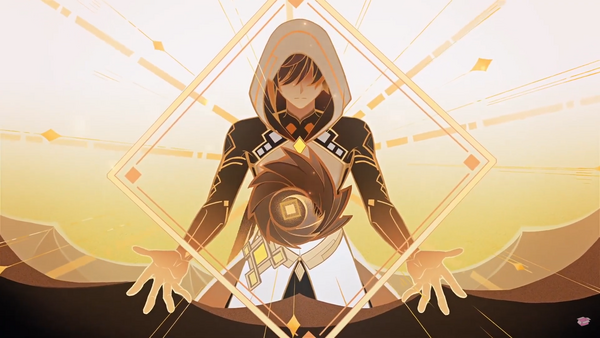 Zhongli is a very learned and erudite character hired by Wangsheng Funeral Home. He is a serene, dutiful and respectful individual who is well versed in the arts, literature, history and customs of Liyue, including those that have been neglected or distorted over the years.

As revealed in the Liyue chapter, Zhongli's true identity is that of Morax, also commonly known as Rex Lapis by the locals, the former Geo Archon and ruler of Liyue. After realizing that his time as the nation's guiding deity had potentially come to an end, he orchestrates the events of the Liyue Chapter in collaboration with the members of Fatui to test whether Liyue was ready to leave behind the era of gods and adepts and enter a new era of prosperity.

Superhuman Physical Characteristics, Master Spearman and Hand-to-Hand Combatant, Possible Inorganic Physiology (Zhongli states that his physical structure "is not the same as that of normal people" and is implied to be inorganic, based on how Barbara was completely incapable of healing Venti's body, which is likely of the same nature), Self-Sustenance (Type 2), Longevity or Possibly Immortality (Type 1. Has lived for over 6000+ years), Magic and Earth Manipulation, Creation (Zhongli is able to create Geo constructs, weapons such as the Summit Shaper and Primordial Jade Winged-Spear ,sentient animals composed of Geo that are comparable to gods in strength), Summoning and Telekinesis (Can freely summon and telekinetically move his primary weapon; unlike other Allogenes, he has shown the ability to telekinetically control objects outside of his weapons and Geo constructs , can summon a giant meteor with "Planet Befall"), Transformation, Limited Flight, Limited Elemental Intangibility, (He can transforms into a set of Geo spears while doing his charged attack, also he can transform into Geo constructs and energy), Forcefield Creation (It can create normal force fields like those used by all alogens, as well as enhanced ones like the Jade Shield of Dominus Lapidis), Energy Manipulation (With Geo resonance waves from Dominus Lapidis), Healing (Zhongli's constellation 6 "Chyrsos, Bounty of Dominator", converts 40% of the damage received into HP), Empowerment (With passive talent "Resonant of Waves The Jade Shield becomes stronger the more damage it receives), Petrification (He can petrify everything in range of his ultimate ability "Planet Befall"), Explosion Manipulation (With Dominus Lapidis, which can be used to cause all nearby Geo constructs to explode), Energy Absorption (Holding "Dominus Lapidis" can drain a large amount of elemental geo energy from a maximun of 2 such target), Limited Durability and Resistance Negation (When the Jade Shield is active, passively reduces the Elemental and Physical resistance of all enemies around Zhongli by 20%), Statistics Amplification (Vortex Vanuiser increases the attack percentage each time it hits an opponent every 0.3 seconds for a maximum of 8 seconds), Possibly Durability Negation (Vortex Vanuiser is described as a polearm that can seemingly pierce through anything) and Damage Boost (With the passive talent "Dominance of Earth", Zhongli gets an extra damage bonus the more HP he has). As an Adeptus, Zhongli also possesses the following abilities: Non-Physical Interaction (Morax could interact with the Chi's disembodied spirit and soul), Sealing (Sealed away several gods as an Adeptus during the Archon War; during his story quest, he sealed away the last of Havria's artifacts under the Guyun Stone Forest), Water Manipulation (Morax used water to seal the Chi), Soul Manipulation (Pinned down and sealed away the Chi's spirit and soul separate from its flesh and bone), Flight, Shapeshifting (Like other Adepti such as Xiao, who was originally a bird, Zhongli can take on a multitude of forms as he desires), Dream Manipulation (Through the Adepti Art of "Gifting Dreams and Visions", Zhongli can enter and manipulate the dreams of others) and Pocket Reality Manipulation (As shown most clearly with Madame Ping and Cloud Retainer, Adepti have been displayed to be capable of creating and manipulating pocket realities as they wish), Resistance to Elemental Manipulation (With the Jade Shield), Biological Manipulation and Soul Manipulation (Should possess the same resistances as Xiao, an inferior Adeptus), and likely Poison Manipulation (Zhongli states that "nothing of this world can withstand the power" of the painkillers he gifted to Xiao, warning the Traveler not to let Paimon eat them)

All previous abilities to a far greater extent, Enhanced Earth Manipulation (A Gnosis is inherently superior to Visions or Delusions due to being the latter two's source of power), Non-Physical Interaction (Able to interact with Azhdaha, which in ancient times was a simple sealed spirit), Flight (As Shown here), Creation and Power Bestowal (Morax can grant Geo Visions as well as enhance others using his Adeptus energies, He can also create vessels for spirits to give them power and life), Transmutation (Mora is formed from his flesh and blood, and serves as the catalyst for physical transformations in alchemy)

Attack Potency: At least Mountain level (Zhongli told the traveler that he could deal with Childe if he suddenly gave him any trouble. The Traveler believes that Childe is no match for Zhongli, despite having witnessed the former's full power on multiple occasions, making him far superior to strongs characters such as Diluc, who in turn are far superior to characters like Razor), Zhongli was able to create the Guyun Stone Forest, an entire archipelago comprised of nothing but the remnants of countless mountain-sized spears he threw to seal away Osial during the Archon War. likely far higher (Although Zhongli has renounced his gnosis, he still possesses the power he had as First of the Adepti and used during the Archon War, defeating Osial and other deities his stone spears are the ones that make up the rocky spires of the Guyun Stone Forest, which are still so large despite Zhongli himself stating that the original stone spears were much larger in both number and size) | At least Mountain level, likely far higher (Morax was much more powerful with his Gnosis, admitting to being easily capable of defeating Osial with it should his plan to test Liyue fail, even though Zhongli implied that Osial was something of an archenemy, referring to their conflict as that of an "ancient grudge")

Range: Extended melee range normally. At least hundreds of meters, probably Tens of kilometers with magic. Should be able to affect an area the same size as that of Guyun Stone Forest, if not the entirety of Liyue

Intelligence: Genius and Combatant Genius (Zhongli seems to know everything about everything, even a simple chunk of White iron Ore, he's able to pick up de best ore and use it to maximun effectivenss. When it comes to Liyue's sacred traditions, the divinity is in the details, even the most fastidious of academics don't claim to know them all. And yet, the mysterious funeral consultant, Zhongli seems to know them like the back of his hand The ancient Rite of PartingIs a most unique tradition. Many details have been lost over time but Zhongli is still able to perform the Rite to perfection. Though he looks young, Zhongli knows each ancient tradition inside out. But his own past is shrouded in mystery. Although he refers to himself as of lesser intellectual brilliance compared to truly exceptional minds, attributing his current wisdom and knowledge to mere experience, he remains a highly respected source of intelligence in Liyue. Morax has orchestrated the events of Liyue's entire history, chaining brilliant-minded mortals, such as Ningguang, as well as his fellow Adepti. As a famed god of war, combined with his immense expertise)

Weaknesses: He is a little limited by not possessing his Gnosis

Geo Gnosis: Gnosis is a divine tool used by the Seven Archons to resonate with the elemental energy of Celestia and channel it directly, granting control over the elements far superior to any number of Visions. It confers upon each Archon their status as divine protector of their respective lands and allows them to receive the power of faith from the citizens of their nation. In the case of the Gnosis of the Geo-Archon, his power also allows him to create the Mora, the currency of the world.

Geo Vision: Prior to gaining his Gnosis and even after losing it, Zhongli possessed a Vision due to his nature as an Adeptus 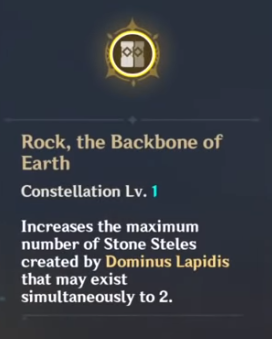 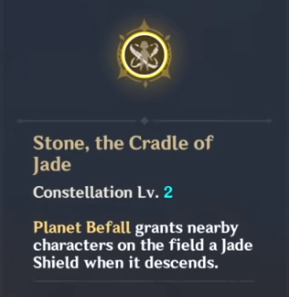 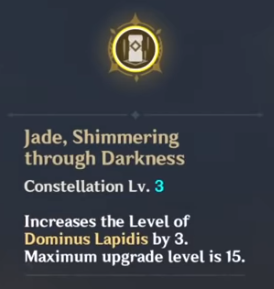 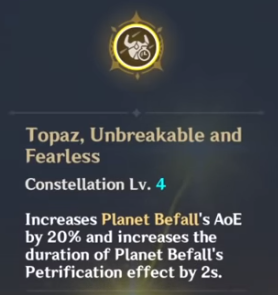 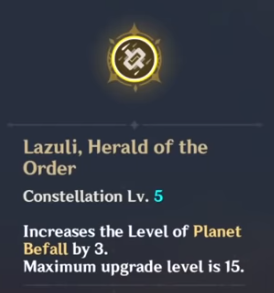 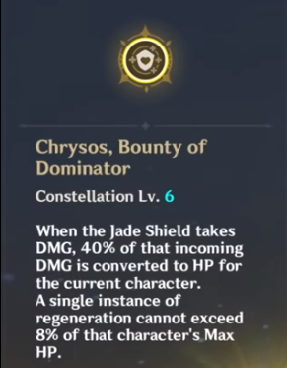